Really enjoyed this trip to the Hadrian’s Wall– organised by a good friend of ours. Although it was still snowing like mad, it was a good idea to just get out of London and kill the winter blues. Sharing my Trips away is a decision i made just recently; my time was pre-occupied with blogging for a fashion Magazine, which was a pleasure, plans to embark on my vintage lifestyle blog was constantly being derailed.

Excitedly, here we are now. Hadrian’ wall was built by the Romans as a defence fortification around AD 122. It was built by emperor Hadrian- hence the name Hadrian’s Wall. Built through the wall were gates  which were also used as custom posts for trade and Taxes. 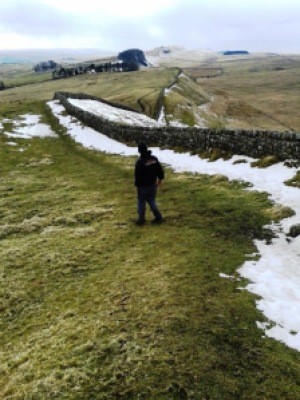 Quite a fair bit of the wall still remains today, people come from all over the world to see the wall. It is very popular with Hikers and walkers who challenge themselves by walking the 117 km (73 miles) over several days, as well as enjoying the history of the area.

I have been to quite a few Hikes over 3 year, and i list it as one of my favourites- in terms of terrain, landscapes and history. One of the famous land marks we got to see is the tree where a scene from the earliest Robin Hood movie was filmed.  The views were amazing as well even with the snow. I insist that everyone should visit, you will not be disappointed.

We took advantage of the bank holiday – (March 29th to 31st, 2013), Accommodation was at the Charming Willow Ford Farm in Cumbria, which was quite handy since it was situated very close to part of the wall. The Hadrian wall winds past the farm and down the Irthing valley towards Birdoswald Roman Fort. Rooms at the Willowford Farm are beautifully decorated and comfortable with underfloor heating for cold weather, and Skyline windows for the lovely sun to wonderfully stroke you in the early hours of the morning.  Served in the morning was a scrumptious organic breakfast- early enough especially since you want to start your walks early. (All the food served at the B&B is organic). You’ll get a very warm welcome from the ever-so-adorable resident Pets, snow ball the black and white cat and two border collie black and white dogs. I really do miss those little rascals as well as the trip.

The Group will not forget the Kind hearted B&B owner picking us up after 11 miles of the hike, this was a result of us being over ambitious and trying to do 15 miles in 6 hours and as you can already guess – the challenge was not achieved and we didn’t want to miss Dinner :D. Also watch out for the lovely pets insisting on accompanying you to your walks. we tried all evasive maneuvers, tricking them and locking the gates behind them but they managed to wriggle their way through. At some point, we got scolded by a sheep owner for bringing “Our” pet dogs near his lambing sheep- hilarious since its not our blooming dog. We all were in fits of laugher.

The B&B is also located near the willowford foot bridge– it is known that the bridge was airlifted into position in 1999 and has won a number of engineering and design awards and has appeared on the cover of ordnance survey L86 map. Day 3 of the hike we crossed this bridge, as well- we had the privilege of visiting Birdoswald Roman Fort– at birdoswald there’s a souvenir shop that also sells delicious liqueurs in different fruity flavour. Lyme Bay Wineries are the masters behind these delectable Liqueurs. I recommend the ginger flavour. You’ll be ordering them by the crates once you finish your first bottle.

Such an amazing weekend trip it was that one of the group members decided to stay one more day.

If you do decide to check out Hadrian’s Wall I recommend the Willow Ford Farm. Book in advance since it does get full.